Alright, let’s be VERY, VERY clear about what we have here.

Essentially, this is a beer marketing company (not a genuine brewery), that is hooking its business model to the word ‘Craft’, and choosing to make a beer in a style that is a close to a macro, adjunct lager as possible, in order for it to appeal to the largest possible audience. (They tellingly declare ‘CRAFT BEER’ on the can in case we are in any doubt about the genuine nature of the this, ahem, ‘product’). Add the ‘can’ nonsense to the mix, a flashy website with noise and no real information, make a big deal out of the artwork, and there you have it – close to 100% fluff. (It’s also worth noting their marketing based twitter feed, where the conversation is all about promotion for promotions sake, and not about beer). 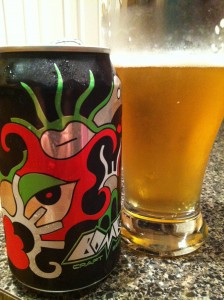 The pour and nose are pretty much exactly what you would expect from a cheap, adjunct lager (despite the claim of no adjuncts being used on their web site). If this doesn’t have some dubious ingredients, then they are making a terrible job of brewing beer with high quality components!

There’s not really much to report here, and if it were in a blind taste test with a bunch of BMC products, it would be tricky to tell them apart. Munich Helles Lager? Well……..perhaps, but this doesn’t distinguish itself from a macro product very much on my palate. Details about the ingredients, FG, OG, ABV, malt bill etc. would be good, but that’s not what these folk are all about.

The tastes follow very similar lines as the nose, without a disappointing ‘shell’ of a beer being the final outcome here.

At the very best of times I’m pretty opposed to the word ‘craft’, and when it is used SO blatantly as a marketing tool and nothing else, it irks me even more. This is an unapologetic MARKETING event, and has very little to do with beer per se. Annoying.

Other: Posturing in can.