Tommyknocker is a brewery that has flattered to deceive me over the years. One of my earliest experiences with them was their Imperial Nut Brown Ale that, at the time, I thought was fantastic. Since then, almost every, single beer has been a disappointment, and this ‘Saison’ is really no exception.

The pour is a golden, hazed butterscotch body, but the head retention and lace are close to zero. Saddening. 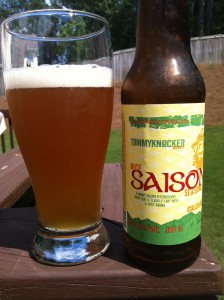 The nose offers some light funk elements, but leans more on the side of citrus tartness.

The tastes follow suit. The beer is more sour than tart, and more infected than funky (not that it IS infected, just that it comes with that apple tartness that is often associated with infections). It’s what I imagine my own first attempt at homebrewing a sour ale might be, essentially not quite there. For a commercial beer it’s pretty poor.

The overriding feeling for me is that is beer is much more sour than a Saison should be, and has much, much, much less horse-blanket that it ought to have. There virtually no character here. Nothing that would suggest a stiflingly hot, French or Belgian farmhouse spring or summer afternoon, and much more to suggest a botched, first time sour effort by an amateur. Don’t get me wrong, this is not sour per se, but it is much too acidic for a beer of this (attempted) genre, and it lacks any depth of character or presence. 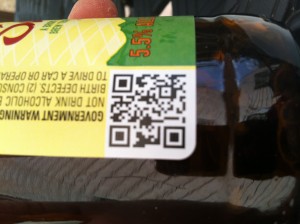 Sasions are not sour, they are organic, hay-laden, funk based, characterful beers. This is a clinical, acidic, semi-sour beer with a macro feel. On the plus side I suppose it does have a refreshing element, but it looks disappointing and betrays the style.

If you fancy a tart, thirst-quenching but at the same time meaningless and forgettable beer, then you’ll probably be able to overcome the disappointment. If, on the other hand you were expecting a faithful Saison (as most would given what’s written on the label), then this is going to make you very unhappy. In short, ‘Saison’ this ain’t.