Purchased on a recent trip to Raleigh at Bottle Revolution. An attractive pour with a good clarity on a light copper color. Unfortunately, that’s as good as it gets, the rest is frankly awful, truly awful. 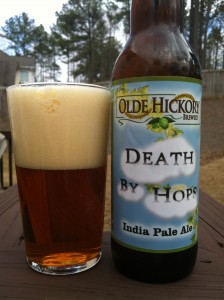 The nose offers only a hint of the disaster that follows, but it does reveal some diacetyl, some metal and some oily notes.

In the mouth the tastes are TERRIBLE. One of the worst beers I recall drinking in some significant time. There is a horrendous, enamel stripping metallic note with wave after wave of diacetyl nastiness along with onions and other vegetal junk.

That would be bad enough, but then comes the kicker. A combination of old metallic hops and oily bitterness. Syrupy, totally unbalanced with a salty assault on the palate, truly awful.

It’s absolutely vile, undrinkable and 100% a drainpour. Undrinkable, so that’s why I gave the three 0.00 scores for palate, mouth and global.

Possible the worst beer I’ve comes across in a few years. If I had home-brewed this I would have thrown the batch, but as a commercial exercise this is pathetic. What’s most worrisome about this is NOT the fact that Olde Hickory brewed a bad beer, that can happen to the best brewers in the world, it’s that someone thought it was OK to release this as a commercial exercise – truly unacceptable.