Label has this declaring itself as a ‘Red IPA’ – more nomenclature nonsense that doesn’t really help, although by the end of the beer I kind of know what they are trying to say!

This is the second beer I have tried in this Sam Adams limited brew series, the Cinder Bock being the first. 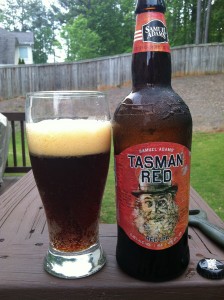 Pour offers a chestnut body and a two finger head. The color suggests a lighter beer than one otherwise might expect and indeed we do find the mouthfeel to be pretty easy. Retention is not great, but there is some wispy, watery lace.

Nose gives little character when cold, and significant caramel malt when warmer. In that regards fairly straightforward and typical.

Tastes are dominated by a light bitterness and a malty, toasty caramel note. Interesting as the beer threatens to get dry (like a typical red ale), but remains quite hoppy and rounded (more like an American IPA). The beer is an interesting marriage of styles, and does feel a little like a clone of the Red Ale and IPA genres.

There’s a definite earthiness to the beer which I don’t especially care for, but unlike some beers that carry that characteristic, it does feel clean. A touch of grapefruit in the back end, along with some light, unidentifiable citrus, both of which I like. 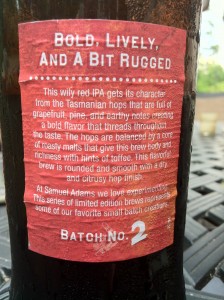 I dunno, I’m not crazy about it, but it’s quite drinkable and well put together. The real issue here is the price. These ‘special’ release beers are all well and good, but the $ that go into marketing and positioning them mean that they end up costing much more than the beer itself, warrants. This is especially true for a beer that is not much more than an American IPA with a slight twist. Glad I tried it, but cost alone would prevent me from bothering again.

Other: 6.75% ABV, Hops are Topaz and Galaxy from Tasmania, Australia. Malts are listed as Two Row Harrington, Metcalfe and Copeland Pale Malts, Special B, Caramel 60, Roasted dehusked malt. Batch No. 2.