The sad (and somewhat ironic) thing about Brewmaster’s Series #1 from Dogwood, was that this, new-dawn-great-promise-of-things-to-come beer, was released to almost perfectly coincide with the brewery closing in the late summer of 2004. It was a cruel trick to produce a beer as good as this, with the real anticipation of many, many more to come in a ‘special’ series (this being labelled #1), only to have the whole thing come to an abrupt halt at pretty much exactly the same time. Youngblood’s is somewhat of a collectors item in the ‘series’ given that ultimately the ‘series’ only ever spawned ‘#1’! 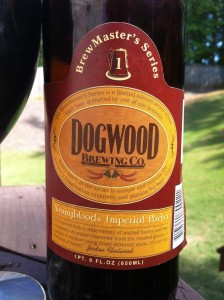 This is the penultimate bottle that I possess, and and at this point is approximately eight years old. I have included my original review from 09/04/04 at the bottom of these notes as a reference.

Inky, motor oil-like pour with only a small collar of tiny, golden bubbles. A lot of liquor notes in the nose and hey waft across the air from the bottle.

Some surprising, prickly carbonation in the mouth. With the carbonation comes spurts of barrel aged notes. Very smooth and easy drinking. Light, sweetened licorice in the finish as well. Nice sweetness with a surprisingly light mouthfeel. In fact, the light nature of this beer is what I might take away on this occasion. Very drinkable and not as viscous as one might think. Looking at my notes from 2004, it seems as though the mouthfeel is where a significant change has taken place. Either way, this really was a well-crafted beer.

A few feint notes of oxidation, but they are held largely at bay. I don’t think there is much more to come from this beer in terms of improvement with age, unless it goes on a roller-coaster ride. It’s probably close to, or even past, its peak right about now, and if you have one I think I’d be thinking about drinking it fairly soon. To that point, as the beer warms the oxidation becomes a little more apparent, along with some more licorice in the finish and aftertaste. 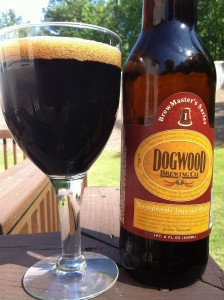 Obviously a heavy roast elements, but the mouthfeel remains very, very light. Bottom of the bottle increases the oxidation further, but the beer hangs in there and holds up nicely to still be a good drinking experience.

Pours absolutely jet black with a dark tan, small head that disappears quickly. Gentle agitation reproduces the head with some effervescence just like a Coke. In fact the whole appearance is *exactly* like a Coke!

All the characteristics of a fine Porter, with some extra coffee/chocolate bitterness thrown in at the end for good measure. I prefer a little smoother edge to my Porters, but I think my taste is a little unfaithful to the style, and that this beer is much closer to where they generally should be.

Got a good coating on the teeth and tongue in the mouthfeel department. Glad to see innovative stuff from the brewery with the Brewmaster series. Hope to see some other fine examples in the near future.