Advertised as a ‘Belgian Style Ale‘ this is clearly a Tripel despite the fact that untappd originally had this listed as something else.

The pour offers exactly what one would expect with a golden body with a high, fluffy white head, but the heads fades very badly. Some lace too, but not a lot. The hue really is quite striking as the light hits it, but it does have a slightly worrying lack of depth about it. 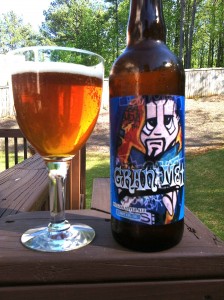 The spiel on the back of the bottle suggests that the beet sugar is added during production to ‘soften’ the alcohol, if that’s the case then it failed! What we have here is a potent, high alcohol Belgian Tripel, that’s frankly a little lacking in body. When this happens, Tripels can get pretty tiring, pretty quickly, and Gran Met seems a little edgy without the backbone to back it up.

It’s not an overly sweet Tripel in the final analysis, and it remains quite drinkable, but for me it comes up short. It’s difficult to pin down exactly where, but I think the lack of body makes it much less satisfying than others in the style. A few phenols, but this is quite a bland version of the style and lacks much peppery presence for me.

Not bad, but there are many better examples out there.