32 oz growler from Hop City rather than a can from the 16 oz, tallboy 4-packs. Official word on the beer from Oskar Blues.

Shiny copper colored pour with some decent white, sticky lace. Nicely put together as expected, with requisite lace for an American DIPA. 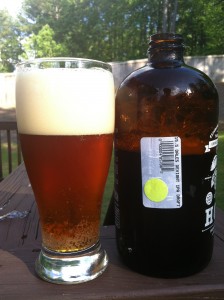 Nose is immediately apparent, but this smells a little different to the usual American DIPA. There is definitely an onion element as per Gubna, and a touch of pine-sol bathroom cleaner. Not really the most attractive combo it has to be said.

Tastes certainly deliver that typical, American, bitter DIPA element, but this is a cleaner hop profile that delivers a malt backbone to hold everything together but at the same time doesn’t get laden and bogged down in sweetness. Quite a bit of bitter onion flavor too, but the hoppiness also delivers quite a bit of green, leafy notes.

As it warms there’s an interesting paradox of both bitter upfront character and a less aggressive finish. This is  quite a clean DIPA, with some well defined lines. In the back end there is still some Gubna onion character though.

Alcohol is pretty well hidden and the beer drinks quite easily, but with onion burps! Palate is a little tired after 32 oz, even fatigued, but that’s to be expected and not a criticism of the beer. There’s an organic, green feel about this beer which makes it feel fresh but also edgy. Not my thing really, but any craving for hoppy, American versions of IPA’s will be satisfied here.