Finch’s beers have been in Atlanta for a few weeks now but becasue I am SICK TO DEATH of the can hysteria which has been obscuring the infinitely more important factor of the beer in the container, I have been actively avoiding sampling these as a minor protest. Eventually I wanted to give them a try, so picked up singles of the Blonde Ale and the Pale Ale. I like the color scheme on both of the cans, it’s eye-catching, I just hope that’s not the best thing about the two brews.

Cloudy, golden pour with a disappointing head and lack of lace. The beer looks a little lifeless and this is reflected in a lackluster mouthfeel. 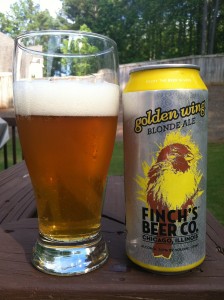 Neutral, lightly bready nose – not much to report there.

Quite sweet, with a grainy neutrality about the beer. It feels slightly creamy when it really should feel spritzy and bright. The beer is not clean, lacks edge and really does not feel like the bright, fresh beer it should be, and that the style really demands.

The finish is surprisingly dry and bitter. This doesn’t do it for me on many levels. One and done.