Chill hazed, clouded brown body with a very disappointing head. Some spotty film, but no retention or lace to speak of. Drab and ugly looking. 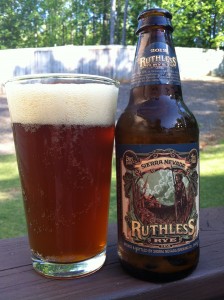 As expected (and known) the tastes are dominated by a bitter, medicinal pepper based rye and frankly nothing else.

Rye is a character I dislike in beer (so full disclosure), but here it lingers, drys the tongue and leaves a green hop leaf finish which burns – and not in a good way. Not good. The IPA character is there, but rye is such an uncompromising malt that it overwhelms just about every beer I have ever encountered with it. There’s nothing subtle here, it’s just a bruising affair with wave after wave of peppery spice that is not tempered by any grace. A loud beer, framed on American parameters of harshness and one that does not work at all well for me. Aggression for aggressions sake in my book, and a beer which to me is simply not enjoyable.

It isn’t attractive, it doesn’t smell right and the tastes are abusive and bitter – not really a winning combination for me.