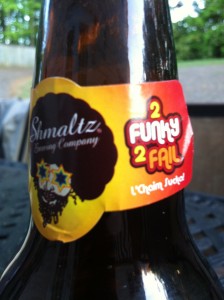 Fail it did! Big time.

Pours as expected with a black body and a initially decent, mocha head. The head fades and leaves a typical, creamy, spotty film but very little lace. Looks fine. 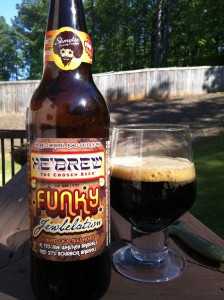 Nose offers some light barrel notes and a tiny bit of acidic funk. Not much else, here.

The tastes are extraordinary, and not in a good way. Let me preface these comments by saying that I generally favor the sweet, malt end of the spectrum, and I know that Shmaltz generally handles malty sweet beers well, but for both me and the brewery, this beer reaches completely new, (unwelcome) levels of sweetness.

Almost immediately it feels as though one is drinking a sickly sweet, sugar solution that has been infused with honey and molasses. There are very brief glimpses of a little liquor/barrel notes and even a hint of acid funk, but within fractions of a second these are completely overwhelmed with sugar.

It seems like underneath this glucose, fructose, sucrose attack, there may be some bitter licorice, but again the sugar is so violent it abuses any subtlety. The alcohol is actually conspicuous by its absence. Under different circumstances one might say ‘well hidden’, but actually in this case it’s a question of eating 10 lbs of pure sugar masking almost any other possible taste sensation. There really is absolutely NOTHING else here apart from a devastating sugar presence – literally nothing. 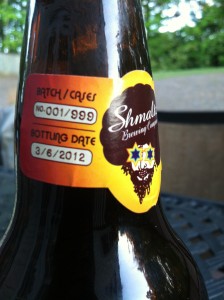 Undrinkable, truly awful and an expensive ($10.99) drain pour, as 3/4 of the 22 oz goes down the sink.  This coming from a guy that generally likes sweeter, malt based beer and has been a big fan of Shmaltz in the past. The price and ABV add to the nightmare.

Almost certainly the worst beer ever produced in the name of Shmaltz, and a truly dreadful, poorly crafted product. It really sums up all that is bad about extreme brewing, and producing a beer just because you ‘can’, and not because you ‘should’. Shmaltz should withdraw this from stores.