I have to say that I approach Hop Manna with a little trepidation, since although I generally have really enjoyed Shmaltz beers over the years, all of their power seems to have been wielded at the malt end of the spectrum and not with hops. That’s also where my general preference lies, so this is a bit of a departure for them, and a beer in style that I don’t often pick up these days. That wasn’t always the case. Six or seven years ago I would quit regularly get cravings for some American hops, and seek out a big, bold west coast DIPA’s, but those days are long gone for me, and a hop craving is something that I get very infrequently of late.

22 oz bottle offers an extremely attractive golden hue with some light lace formed by the modest head. Carbonation is a first glance a little high, but settles and compliments the style and the beer quite nicely in the end. The head seems creamier on latter pours from the bottle. 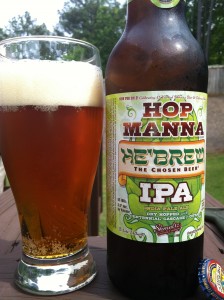 The nose and tastes render a fairly classical ‘C’ note, with centennial, cascade and citra noted on the label. Dry hopping is evident, with green notes all over the place. Mid-high hop resin and pine, and a little oiliness adds to a slightly viscous body. 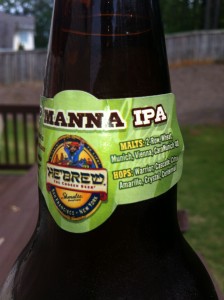 Nicely put together for a number of reasons; attractive color, balanced nose and palate with sufficient grapefruit to know that this is a hopped up beer, but also plenty of sweetness. Also, a perfect mid, IPA-DIPA balance in terms of viscosity, with the beer being quite drinkable, but still feeling like it packs a punch. Interesting (and difficult) tightrope to walk, but they pull it off nicely. 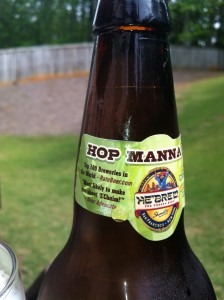 This would be an interesting beer to offer up as a typical American IPA, without blowing the doors off palates, or having people feel as though their taste buds were being abused. All the important elements of an American DIPA, wrapped up in a lighter package – skillfully done.