12 oz single; I think I paid 89 cents – I may have been had! Another Blue Moon Seasonal, and I have a feeling this is replacing the now longer brewed ‘Rising Moon’ which was a terrible, terrible ‘Amber Ale’, so I wonder if things have taken a turn for the better. Quite an attractive label, but the outside of the bottle is ultimately more inspired than the inside!

The beer pours with a golden macro color and a disturbing lack of head and lace after the initial burst. The beer quickly looks lifeless in the glass. A few bubbles rise, but the don’t seem to threaten to produce a head after the aggressive, initial pour. 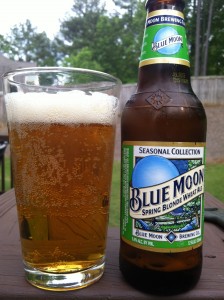 Nose offers a neutral malt sweetness with perhaps a hint of citrus, but it’s an artificial citrus sweetness rather an an hop character.  The label boasts Orange and lemon peel has been used, but there is much more sweetness than any tart elements here. there’s a slight medicinal or plastic taste about he beer, and a surprising level of sugary sweetness. Outside of that it is terribly bland.

The beer quickly becomes nothing more than a light (watered down) malt liquor! A cloying sweetness and a vegetal, cooked corn/macro adjunct are all that come to the fore

Overwhelming feeling here is that of a sweet beer without character and lacking in any kind of presence. Absolutely zero reason to revisit this, and if possible, even worse than ‘Rising Moon’! Quite poor.