This is approx. 3 months old so certainly not quite as the brewer intended, but still drinking absolutely fine.

The pour is a really nice, rich looking mahogany affair with some significant red tinges. Head is modest and not especially well retained. Off white color. 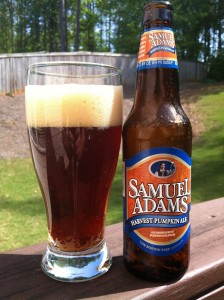 Nose and tastes are pretty rich. Boston Brewing Co. does a great job with beers like this, Octoberfest, Boston Lager and others, where they manage to capture the depth of malts used – it’s really a quintessential feature of so many of their beers, and why I really enjoy what they do so much.

Both the nose AND the tastes still have some significant pumpkin flavor which leads me to believe that when this was fresh it was REALLY strong. Despite being a few months old, it’s still very much noticeable. Having said that, when one gets past that the malts take over and the beer really becomes a Sam Octoberfest clone – that’s a good thing, since I really enjoy that beer, too.

Like the pumpkin flavors, the spice elements are both present but not quite as strong. Along with that there is some nice roast malt notes and of course a sugary sweetness that comes along with them.

Like the Octoberfest I find it drinkable and moreish, but wonder if I would have felt the same way a few months ago when the pumpkin was stronger. It may be the case that I would have enjoyed it LESS then, so an interesting thing to contemplate.

Tasty, and still pumpkin like, I *think* I would have liked it LESS when fresh, but that’s I thing I hope to be able to test next year.