I suppose it’s worth stating right off the top that I detest the name, ‘Black IPA’ and generally I like the tastes of these beers just about as much, so do with that what you will, full disclosure has occurred. In that light, the fact that the label says ‘American Black Ale’ actually pleases me – imagine THAT! 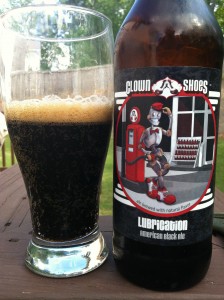 This 22 oz bottle was purchased from Total Wine in Kennesaw, GA several months ago, when Clown Shoes was only being distributed by them, and before the more general release in GA this week. The label declares it was ‘BOTTLED 10/11’.

Pour is as expected, with a black body that reveals some ruby/orange highlights at the extremes and where the light catches it. Head and lace are a little disappointing given the beer is only 6.0%.

The nose avoids a green hop note which for me is good. I simply don’t like the combination of a black body and a fresh hop note which is usually found in ‘black IPA’s’, so for me this this relative lack of hop note in the nose is a bonus. 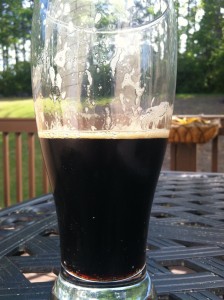 It doesn’t take long for my dislike of the style to kick in though, and the tastes provoke it. There’s very little here other than a misplaced bitterness and a strange green hop attack which ‘black IPA’s’ tend to give, even if the hops are not that fresh! Odd, annoying aftertaste that is a combination of grapefruit juice sprayed on to metal, and rest-stop toilet soap. Mouthfeel is a touch thin, although not as bad as some I’ve had in the style. Actually, as the beer warms the aggression drops away a little which for me is a really good thing. By the time I get to the bottom of the bottle I feel less upset about the whole thing, and the lack of use of ‘black IPA’ certainly helps. In the far, far, far back end there is a decent blob of chocolate malt too – actually, quite obvious even though it is really late. No orange peel here for me.

Ultimately this is never a style I will warm to, not least of all because to me the whole thing seems like a stupid gimmick (if you want hops why not just drink American IPA’s and DIPA’s straight up?). Having said that, a bit like 21st Amendment’s Back in Black, this is beer that I hate less than many others in the style. That’s about the best comment about a beer of this style that you are ever likely to get from me!