12 oz can from Vulcan Beverage, Birmingham, AL, and also at the brewery tap room. the picture below shows the brown ale on the far right alongside the IPA and the Stout. 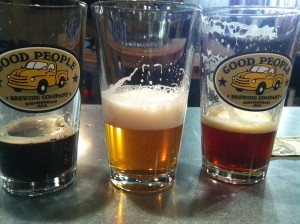 Unlike the IPA, there seemed to be less discernible differences between the two versions of this beer (one from the can and one on draught). Both give pretty classic interpretations of the style in a solid (if unspectacular) manner. Such simple interpretations are disappointingly a relatively rare thing, and when I DO come across them I am usually delighted. It’s so good to encounter really simple, well made beer.

On to the specifics.

Obviously a malt based, grain beer rather than much hop-forward character, BUT having said that it certainly exhibits a hop profile which is more in line with an American Brown than its parent English version – that’s OK, and entirely appropriate. I am generally VERY careful about describing brown ales as ‘nutty’, ”caramel’ and ‘toffee’ based, since to me those adjectives are generally over used in this context, and the truth of the matter is that there are NOT that many Brown Ales that are truly ‘nutty’ or ‘toffee’ flavored in their delivery. If I DID feel a strong element of that then I would go ahead and report it – I don’t, so I won’t. To me the beer comes across as rather a simple bready, malt affair with elements of typical sweet browns. Outside of that it’s pretty ordinary in one respect, but a little less ordinary by virtue of the the fact it’s so simple. Unpretentious is a good word, and that’s not all that common when dealing with so many American versions of traditional styles.

I’m SO tired of all the stupid ‘can hysteria’, so the presentation irks me a little (it’s in a can, WHOP-DE-DO, SO WHAT!? How about asking how good the damn beer is??)

Perhaps the most interesting thing about this beer to me is this. Apparently it has a decent blast of Willamette hops added. I generally find that hop to impart a particularly earthy taste to beer which I do NOT care for at all. Surprisingly there is no such element in the taste that I encounter, and frankly I’m delighted.