BJCP Style 23 is ‘Specialty Beer’ which really means a dumping ground for beers that do not fit into other categories. Light, chill-hazed pour. Scant head and lace. 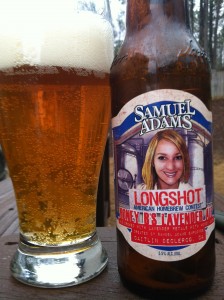 Nose gives a really large whiff of lemon, and in that respect it smells like a lager shandy.

The tastes also take the lager shandy note , at least up that every final flourish where a bit of floral lavender kicks in. This is nowhere near as floral and lavender based as I was expecting, which of course may be a function of the relative age of this beer. More lemon notes greet me. The beer is not especially clean, and suggests a a touch of viscous nature about it.

To be fair, the floral element grows a bit as the beer warms and as I get through the 12 oz, but it is never pronounced. Sweetness lingers.

Interesting beer, with lemon (not lavender) being the major elements at this stage in the beers life. Perhaps at one earlier juncture this was a different beer, but now the lavender takes a back seat.

It’s a little heavier in terms of alcohol and mouthfeel than one might expect. It’s a little like a lemongrass infused, Imperial Pilsner – crazy I know, but drinkable.