I had this a long time ago (almost immediately after it came out) and was somewhat disappointed. As I was passing through the Olde Crabapple Bottle Shop a couple of days ago, I saw it and thought it time to re-visit the beer to see if a little age has made a difference, or if my opinion could perhaps be changed.

Pour is unfortunately a two part affair. The initial pour is a little anemic, with a pale yellow, straw color and a distinct lack of body associated with it. The second half gives a much richer, butterscotch color and a fantastic, ice-cream like head. The head is certainly a feature of this brew. 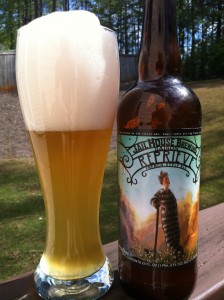 I would be tempted to actually pour the whole beer into a much lager container, and then pour it back into the glass I was going to use in order to get the more robust appearance just right. It gives the impression of being bottle-conditioned, but the brewer tells me it is not. 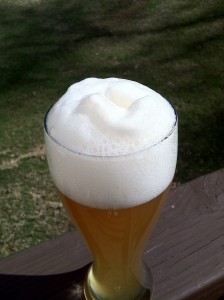 The carbonation is VERY lively at first, but settles down to give a nice, effervescent mouthfeel with a tiny prickle. The beer certainly asks for your attention in that regard.

The nose offers a dirty, brew-day, yeasty smell which is actually quite attractive to me – so far, in terms of appearance and aroma, so good!

Unfortunately the tastes, like the first time I had it, are a little weak and do not complement what the eyes and nose first experience. It’s surprisingly bitter and lacks a great deal of Saison character. The description as a French Biere de Garde would be closer, so perhaps a more open interpretation of the label and style would work better here. Not so much a funk element, but there is a yeasty bitterness which comes through quite strongly. The finish is a little tart, but truthfully more bitter than traditionally hay-like or any sharp fruit. 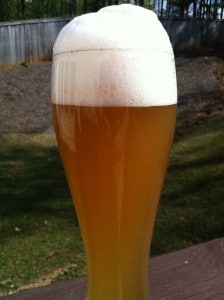 This beer has a lot of promise but ultimately comes up short where it most matters, in the taste department. I can’t quite put my finger on it, but it’s lacking something. Not bad, but not the best that Glenn has produced by a long chalk.