Right off the bat I am extremely annoyed by the abuse of the ESB moniker, and although utterly trivial to some people, I feel it deserves more respect and abusing it serves to misinform the public.

Pour is an attractive lightly clouded orange amber with a small white head. Lace is minimal. 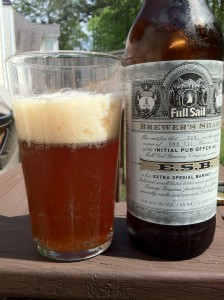 Nose offers some pleasing, bready malt balance and a hint of hop presence but that is very low. Smells much like an English bitter should.

The tastes are very good. The initial tastes makes me want to gulp this beer. There is a tiny, tiny, tiny underlying grapefruit note that gives way almost immediately to a large fruit presence that is much softer and sweeter. Essentially the sweet, bready malts get to massage the beer and bring it into English territory quite quickly. A nice malt line runs through the beer that is both complex enough to be interesting, but also simple enough not to be a distraction. There are occasional hop notes that drape themselves off that malt backbone, but they are quick on their feet and do not deter the malt element. The beer does have that classic, moreish feel about it and the biscuity nature of the malt bill really shines through rather well.

A fair bit of creaminess in the mouth, the beer is satisfying and has a really pleasing presence. Slight, slight bitter soapy twang in the back end but it’s fairly muted. Warmth REALLY accentuates the fruit for me with a lot of sweetness 3/4 of the way down the 22 oz.

I’d like it a little more at 5.0 or 5.5 rather than 6.5%, but this is a tasty beer with much to offer the seeker of maltier, more traditional styles that pay some homage to the English brewing methods and output. Whilst incredibly pleasing on the tongue, this actually serves to make the misuse of the ESB moniker even MORE annoying for me. An educational opportunity missed, and another attempt at ‘being clever’ by American brewers which leaves me still seeking understated character.