BJCP Style 23 is ‘Specialty Beer’ which really means a dumping ground for beers that do not fit into other categories. 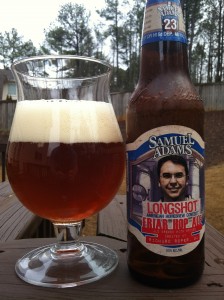 The nose offers a lot of musty, fruit elements but surprisingly (given the name), almost no hops. Strange, but age is probably to blame here.

The tastes reflect the nose somewhat (at least in terms of the musty nature). In its current state, this beer is very malty and really fails to deliver any hop character, or any really distinct Belgian note. The hops being absent are probably a feature of the age of the beer, but the lack of Belgian character is less easy to understand. I get a few apricot based esters, plus some tropical notes but they are not well-defined.

As the beer warms there is a noticeable banana note and a little more orangey bitterness. Quite full in the mouth without ever feeling syrupy or viscous. Alcohol is present by never especially intolerable. Light solvent in the back end.

Not quite sure how old this beer is, but it’s clearly not as fresh as it once was, however I don’t think it’s deteriorated to the extent where it has become significantly damaged – less hoppy? Certainly, but still drinkable.

This is not currently drinking as a Belgian IPA as I suspect was the original intention, rather it has turned into a musty, fruity, high ABV sweet beer with the Belgian yeast notes missing.

Go Here as an example all software free download