It’s an attractive presentation in the dimpled, very heavy, olive green bottle, and at $16.99 I KNOW this contributes to the price (I’m not naive), but I like the look with the hanging neck label and paper-sealed, cap. 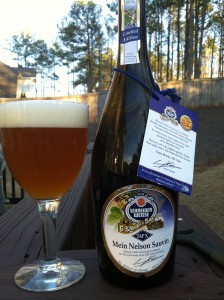 A ‘bottle fermented wheat beer’ that was brewed to commemorate the 25th anniversary of the ABT cafe’s in Holland. The beer describes itself as a ‘wheat bock’, so Weizenbock it is then.

Pour is a marmalade color with a golden orange murkiness to it. Looks like it might be more viscous than it actually turns out to be. Color is about right for the style, although I prefer something a touch lighter if truth be told. 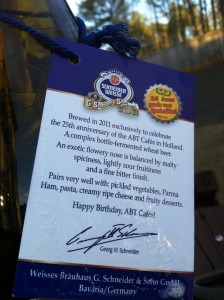 All the elements are there but they are all a little too light. Some banana, some alcohol, some bitterness, some wheat, but it never really melds to the the extent that I was expecting. Banana threatens the most, but that is mainly upfront,and by the middle and back end it’s all but gone. The nose is not strong and nor are the tastes for me, and the beer slightly disappoints given the fanfare surrounding it. This brewery can make much better beer than this, and I feel a little let down, especially at the price point. Mouthfeel is very light for the style IMO, and the beer lacks much presence. I was looking for a bigger, more viscous beer. It feels thin in parts which is not what I was expecting at all. This seems like one of those ultra-rare occasions where I think some additional ABV and alcohol presence would have helped a bit – it’s just not ‘big’ enough!

For all the fuss and expensive presentation I wanted (and expected) to like this a whole bunch more. As it stands it was OK, and frankly not a lot more. In that respect a little disappointing. 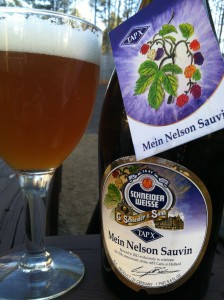 In the end, given the price, the presentation, the brewer and the commemorative nature of this beer, I just wanted a LOT more than I got. It seemed slightly lightweight and lacking in presence for me.