Pretty standard all-American IPA here. Reviewed from the bottle, but notes from at least one other tasting on draught has also gone into this review.

A light, chill-hazed pour with a orangy golden hue. Actually, on closer inspection this looks less like chill-haze and more like a completely unfiltered beer. 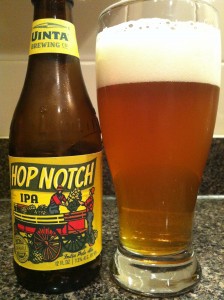 Head is medium sized, but bone-white and nicely pitted. Retention isn’t bad, and lace is sticky if not incredibly extensive.

Big ‘C’ hop nose and tastes and not much else – that’s OK really, since it is what it is, but the problem a beer like Hop Notch will have in the grand scheme of thing,s is that it simply won’t stand out in a massive sea of similar beers. Couple it with some odd packaging and a relatively non-trendy brewer and it’s probably not gonna make much impact here.

Plenty of tangerine like grapefruit, but it actually feels a bit thin in the finish. In fact, the finish feels increasingly thin and weak as the beer warms. For whatever reason, this seemed less of a problem in the draught version of the beer than the bottle. The bitterness hangs around a bit but lacks much definition.

Alcohol is quite well hidden and the whole package is supported well by the malt bill.

Ultimately quite enjoyable but a beer that simply does not stand out much. There’s no real reason to go back to this beer so for many people that are drinking a some distance from the source, this is unlikely to become any kind of ‘go to’ beer. Above average I’d say, but only just.