In a nutshell, I think it’s worth saying that if a hybrid beer should taste like a combination of the styles, then this beer absolutely nails it. In that regard I am pleased by Cinder Bock. It’s also true that thinking about it for a moment, a mixture of a rauch and a (double) bock are potentially interesting bedfellows, but we all know that things that look good on paper don’t always work out so well in practice. When I looked at the other three beers in the series available to me, I thought this would be the one that I would have the best chance to enjoy based upon the marriage of styles, although the Tasman Red also looked somewhat interesting.

The beer pours an attractive mahogany brown with a smallish head. Some nice clarity, always something that I look for in both a rauch and a bock. 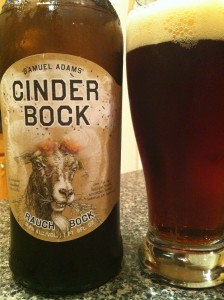 The nose offers a distinct smoke element at first, but on warming this fades a little. Similarly, in the tastes the beer offers smoke at first, but quickly it’s the sweetness, alcohol and malt of the bock that start to break across the palate more and more. The alcohol is a little warming too, which at 9.4% is hardly a shock.

The interesting thing is that this beer seems to simultaneously work quite well (in terms of the marriage of the styles) and clash quite poorly. I wonder if the alcohol content is to blame for this, and perhaps a little less aggression in that department would help it come together a bit more.

In truth this beer is very sweet, upfront, throughout the middle and also in finish – there’s no getting away from the sugar. It certainly is punctuated a little by the smoke, but the alcohol and sugar makes it pretty heavy going for me. 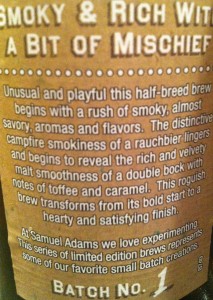 I quite like the combo, and I feel it works well in places, but the sweetness, alcohol, smoke and malty combo just feels a little like too much work for me. Sweet stickiness about the beer which of course for a double bock is appropriate, but it grates a bit against the smoke.

In the final analysis I like this as an experiment, and I’d like it more with less alcohol, but either way I can’t see myself drinking much more of it. It’s just a bit too much of an assault on the palate for me, and the styles simultaneously clash and meld. A paradox which I really want to work, but in the end it’s just a little too much stuff in a single bottle – a common American fault. 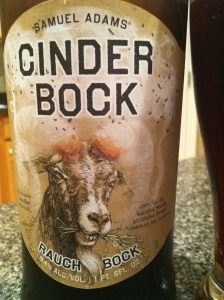