Black pour. Tan head, with some nice legs. Head retention is better than expected given the ABV. 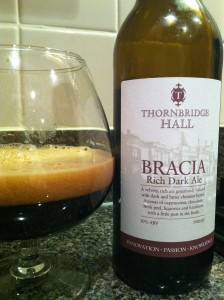 Nose offers some alcohol and some solvent based licorice. On warming it seems a little nuttier.

Tastes start with more of the light licorice and mild sweetness. It then gets a bit odd – in fact it gets very odd!

I do get a little honey, but it’s mainly sweetness rather than noticeably bee-based. The nose and tastes also exhibit a strange, woody element that initially I cannot place. However, once I read the label it becomes obvious what it is – the chestnut character. There is something a little different about this. Some nutty parts but not pronounced.

There is a definite mineral, earthy nature about the beer and it doesn’t quite meld for me. The beer is nowhere near as sweet as I was expecting it to be. The mild licorice finishes the beer. It is incredibly light in the mouth considering the ABV, and gives virtually no viscous elements.

This is a unique beer. It’s VERY seldom that I say something quite as definitive as that, but I found it extremely difficult to pin down. It threatens to be a RIS, a mead, a strong ale, a hoppier beer, a wheatwine, and even a brown ale at various times, but it never quite hits any of those styles. There’s a cardboard element as well which is obviously less pleasing. There are musty elements that suggest ‘old’ (and not in a good way), and each mouthful gives me degrees of ‘good’ and ‘bad’, with unfortunately the emphasis on the latter.

I just don’t get this beer at all. It has an increasingly large soy sauce element as it warms and as the 500 mL is consumed. Some Munich dark lager element as well. Crazy, and all over the place. 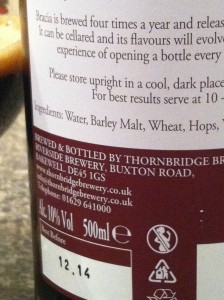 I bought this on the basis of some recommendations from people in England, and at a cost of approx. $15 for the 500 mL bottle, I needed to be pushed. Now, I’m not saying I regret buying it because I’ll gladly try anything once and frankly I did not think it was horrible, but I will definitely not buy this again, and I would definitely put it in the ‘absolutely terrible value’ category. In the end I couldn’t get through the 500 mL. Expensive, partial drainpour.

I’ve drunk a lot of beer in my lifetime, a LOT, but not too much like this and frankly I’m quite happy that I haven’t come across too much of this type of beer. It’s odd and it doesn’t work well IMO.