On-tap at Deckard’s. Rich, brown body, off white head, decent lace. Fades to a slightly disappointing tiny collar. Held to the light, there’s some pronounced, red clarity in the body.

Light in the mouth and less chocolate than the initial nose would suggest. Gentle alcohol and a light, brown ale acidity. Not a huge amount of nut element here for me, and the beer drinks very lightly and easily. 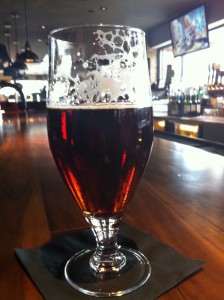 Chocolate notes are a touch more pronounced in in the back end and finish, and manifest themselves a little more than in the middle of the beer. Some more light acid feel which I like. Coconut? I dunno, I don’t get much nut character at all, but I did get some sweetness in the finish that I suppose is the coconut.

Simple, light drinking, non-nutty brown ale with some pleasing acidity. Easy drinking, and a beer that could be consumed in some quantity from a taste angle, but the ABV is too high! This is SO common of many, otherwise really drinkable, American beers. Since the ABV’s when compared to real session beers are so high (for example this beer has 37.5% more alcohol than a genuine session beer), they become difficult to drink in quantity even when their tastes suggest that they could be – very, very frustrating.