I had heard about the new, embossed and differently shaped Dogfish Head bottles were about to come out, and apparently Noble Rot is the first beer in these bottles to make it to the Atlanta market. As I took the bottle from the shelf it was immediately apparent to me that the bottles had changed, and I made a mental note of it. I drove from the store directly to a bar to grab a quick beer on my way home. In the bar I ran into Scott from Burnt Hickory Brewing, a new brewery about to open in Kennesaw, GA (@BHB_Brews). He and I got talking, and astonishingly he tells me that it is his brother in law, Chad Collier, who was largely responsible for the introduction of the new bottles – strange!

Anyway, back to the beer.

The pour is alarmingly light. Head was white and rocky but the retention was not great, and the beer has a color which is very ‘washed out’. As it turns out, this is the first sign that what’s in the bottle has some very significant white wine character. 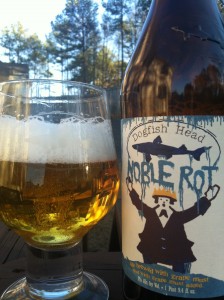 The nose offers very large, grape and apple character that can not be mistaken for anything other than the grape based beer that this is. It’s strong, potent and smells delicious.

As I hoped, the tastes follow suit, but the tastes are VERY strong on the wine side of things. Generally I am a big fan of beers that have that easily identifiable white wine character, but this one is so strong in that department that it becomes more like a wine with beer character than a beer with wine character. There is quite a significant amount of solvent alcohol, and the white wine grape elements are incredibly pronounced.

This beer is right up my alley, but to call it a saison is misleading. To be fair, the label says ‘sorta-saison’, so I suppose DFH have already flagged the slightly unusual nature of things here. I love the vinous character and it reminds me a little of Allagash Victoria, but the truth of the matter is that it really takes it up a notch. I’d even go as far as to say that if you are not a fan of white wine, you’d better stay away from this one.

The finish lingers a little with wave after wave of alcoholic grapes and I like it. It’s just that the intensity of the beer, coupled with a very noticeable 9% ABV starts to get a little much at the end of the bottle.

Enjoyable and tasty certainly, but if the foot could be removed from the gas in terms of ABV and grape elements, I think this would be a better beer – it would certainly be more drinkable with some limiters placed on it.