OK, so I suppose this setting out to be a combination of 420 and IPA, merged for the latest in the Dank Tank Series. The usual presentatin for the series, this time coming with a sort of retro-blue and yellow color scheme. 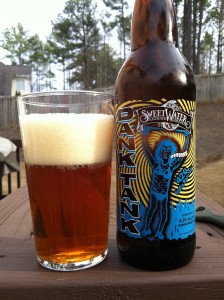 Pour is a fairly bright, orange affair with a nice, white head. Some decent lace and retention.

Nose is strong. Big, clean citrus lines with some sweetness. Some added aspirin notes clear the sinuses in the back of the aroma.

Tastes reflect the nose but quite surprisingly bring a lot more sweetness than I initially thought might be the case. More aspirin in the finish, and some quite substantial malt presence. Interesting, since if you are familiar with 420 and IPA, there does seems to be elements of both of those beers present, and they meld rather well. The aftertaste produces a lot of orange peel marmalade for me.

There’s a touch of syrupy viscosity about the beer, which, given the ABV is hardly shocking, and it doesn’t take too much away for me, but having said that I could enjoy this at 1.5-3.0% ABV lower, and still get the same flavor experience. It’s a shame, since I feel as though I could drink more if it not for the hefty 8.5% tag.

A beer that reminds me a quite a lot of Breckenridge Small Batch 471 IPA – very similar in many respects. Both have the same oily hop presence and both pack a punch. The aspirin continues to manifest itself, but it a relatively gentle way.

At the outset I felt this was perhaps going to be another ‘west coast DIPA based affair’, but it’s different to that. There are softer tones and less aggression built into this beer. It comes together quite nicely, and the the sum of the parts seems better than any one aspect. A very solid and pretty tasty beer, and one that certainly represents the style quite well.