Pour is a very dark brown, close to black body with a samll but nevertheless nicely formed mocha colored head. The head is only formed after an aggressive pour and the retention and lace are both low, but given the ABV I’m pleased with the appearance. 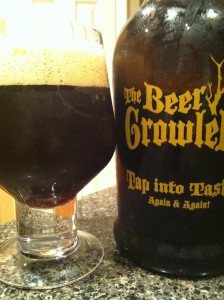 The nose never really gets especially large, even on warming. Some sugary sweetness and a little alcohol but outside of that not much else in there for me.

The tastes are pretty interesting. It’s got some Belgian character with some fruit and yeasty notes. It also has a noticeable licorice note with combines to suggest a Belgian Stout affair. I pick up a little chocolate, and in part it reminds me a little of Bell’s 10,000. Don’t get me wrong, it’s a lot less complex and there is nowhere near the aggression found in that beer, but it has that licorice element that I associate with that beer. The licorice is not a bitter licorice either, it’s a sugar coated, smooth feeling. It’s very sweet – VERY, and that’s OK for a beer of this nature, but in anything other than small doses, after a while it gets a little grating.

The mouthfeel is incredibly light, and the drinkability is very high when you consider both the ABV and style. The finish is warm, has same depth and is alcohol laced, but it never feels too harsh – surprising. I might even go as far as to say it seems a bit too light in the mouth – ‘watery’ would perhaps be too extreme, but you know what, it’s going in that direction. A beer of this style and size needs a little more body IMO.,

It has a liquor like finish which does not manifest itself properly until the finish and when the beer has warmed. 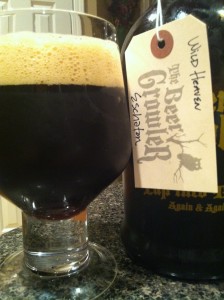 Not bad, but after about 8 or 9 oz I feel as though I’m beginning to have had enough. This is a bit of a sudden feeling, because after the first 2 or 3 oz I thought that I could drink more but the sweetness and alcohol begins to catch up pretty quickly.