Surprised to find this at Hop City on Friday. I didn’t even realize this was coming out as the next beer in the Solitary Confinement series. Not a favorite style of mine, so we’ll see. Described as an Imperial Pale Ale (not IPA) on the label; not sure if that has much significance since the beer really feels like a DIPA whatever the label declares.

Pretty, bright orange color with great head and sticky lace and retention. Good to see the sticky lace on a beer of this style – this delivers. 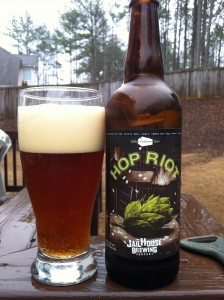 Nose is VERY bright, green and strong. Very much in the wet hop ale category. Grassy and fresh.

Tastes reflect the nose but a large malt presence comes in quickly to support the hops. Light, lingering bitterness only at the very end, and it’s quite short. Not much here other than a big, hoppy, west coast style DIPA even if it doesn’t want to be one. If I had to distinguish this from some others in the DIPA style I would say the wet hop nose is quite prominent and the beer hides the 8.0% ABV quite well. Outside of that all of the usual elements are in place with big malt presence accompanying lots of unrelenting hops and plenty of bitterness.

A few big hoppy burps are induced which is always a good sign.

I dunno, a competent beer, but I’d rather than Glenn stayed away from producing ‘yet another DIPA’, and perhaps concentrated on some of the more subtle styles and ABV’s that I think he excels at. Try it if you like DIPA’s, you’ll most likely enjoy it, but frankly this is not distinguishable from hundreds of other American beers in the similar, over-hopped, aggressive style.