Part of the usually tremendous, Smokestack Series, the beer pours with a magnificent, bright, golden orange marmalade colored pour with a huge head in the Duvel chalice. Looks wonderful. Smudged dot-matrix ‘Best By’ date on the neck is unreadable, along with another illegible number – perhaps a batch number.

Nose immediately gives away lots of spicy, tropical fruit along with some very light funk. Agitation and warming really bring the nose into its own. VERY strong scrumpy cider notes, tempered with telltale horseblanket. Quite pronounced – for a second I thought I was back on the farm, at home, in Devon! 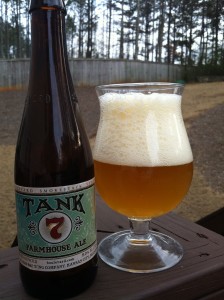 Sweet and sour effect as the alcohol, fruit elements and light funk break over the tongue in a real cacophony of flavor. Bitter orange peel in the back end and a finish that fades quickly to reveal more sweetness. Light carbonation keeps bringing back the marmalade notes along with a hint of mixed peel.

The funk is lighter in the taste than one might expect (when compared to the nose), and is replaced by the orangey bitterness. I like it. The general lack of funk in the taste is a little different for the style, and as such this sits a little outside the realm of your average Saison methinks. The orange element keeps repeating itself for me.

Alcohol is well hidden and does not manifest any real solvent notes. Bottom line – I wished I had brought a lot more back from Birmingham.