Dark brown (close to black) pour with a modest, pitted, light beige colored head. Lace is medium, retention OK as the beer settles to a pleasing film and collar on, and around, the surface of the beer. A LOT of floaties – a lot. The (presumably) yeast pieces, resemble a cork that has disintegrated into the beer.

The nose is very malty with a little Belgian yeast. It almost smells a little like a bready, Brown Ale. A few dryish chocolate notes, too. 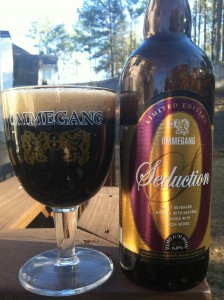 The tastes offer an interesting combo of light tartness (not necessarily discernible to me as cherry), a little ‘lacto’ milk character, and some dry Baker’s chocolate/cocoa. Mouthfeel is pretty light too, but it comes with a really good depth of flavor. The mouthfeel makes the beer very drinkable and moreish without detracting from the tastes.

The finish is a little dry, but not as dry as a combination of potentially puckering cherries and cocoa might initially suggest. A pleasing bitterness about the beer which is nicely balanced and tempered with a light licorice note in the finish. The chocolate definitely wins the battle of the additions, with the cherries taking a back seat. To me, it feels as if the tartness of the fruit with the milky nature of the chocolate produces a beer which has some milk stout character. Don’t get me wrong, it’s sweeter than most of those and gives a decent Belgian Dark character, but there is something undeniably lacto surrounding the beer for me. The more I drink of it, the more it feels like it’s going from milk chocolate character to dark chocolate, and this is a nice complexity revealed.

I really like this. There’s a very good depth of flavor packed into a beer that one might expect to come with a heftier ABV than the 6.8% advertised. I’ve drunk many beers with higher ABV’s that don’t do as much as this.

Belgian Porter? Well, I can see where that moniker might originate from, but the beer really drinks more like a chocolatey, light lacto, Belgian Dark, but of course that wouldn’t make any sense! As a self-confessed style traditionalist I don’t really like the Belgian Porter reference, but another part of me (that loves to have the bottles’ label description match the contents), feels better about the words on the outside.