It’s my understanding that the Monday Night Brewing beers first saw an unofficial light of day at a special event at Leon’s in Decatur, GA a few months ago. I wasn’t there and didn’t have a chance to try them so the following is hearsay, but a number of people that I spoke to said that they were underwhelmed. As a result I was initially a little skeptical (it’s human nature to be wary once one hears some negative stuff), but that was definitely not going to stop me from trying them. My first opportunity was with their Eye Patch Ale, IPA that came from Ale Yeah! in growler format. 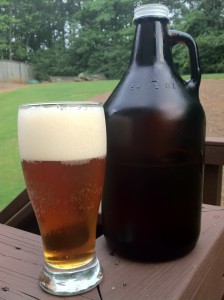 Attractive, golden orange pour with good head and retention and some decent lace. The beer seems a touch over-carbonated for the style initially, but things settle down to give a less prickly middle and end.

Nose offers some soft hop notes, and the subtlety in this beer is much greater than many American IPA’s. The tastes reflect that subtlety and to be honest this beer drinks with an emphasis on balance. Nice, sweet light sugary malts work well with some simple and restrained bitterness. A splash of grapefruit here and there, a mild waft of floral aroma and taste, a gentle kiss of oily hop resin, but the beer is nowhere near a typical grating version of an American IPA. The malts are not sufficiently biscuity for me to allow me to call this an English style IPA, but it’s definitely on that end of the spectrum.

The very attractive, light golden pour persists, as does some decent lace and some nice head retention. As always, the emphasis here is on sweetness and some very simple, crisp hop notes. Bitterness remains really mild and simple in its delivery. Light oil in the hop notes. 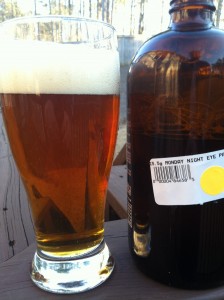 There’s a lot of sweet malts present here and this beer continues to impress in the way it gentle delivers some American hop notes. This is really a hybrid beer. It doesn’t manifest any significant American or English notes in terms of a typical IPA, and for some people that may prove annoying. For me it’s an interesting combo that works really well.

Shame that Thomas Creek can’t make such a good job of their own beers.

Other: 6.2% ABV. As yet no bottles, just draught in bars and via growlers.