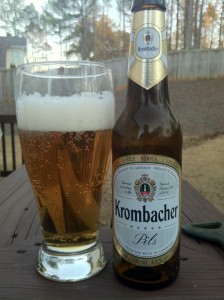 Nose is pretty skunky, noticeably so in fact.

Tastes are better than the nose would initially suggest.

Vegetal notes in the taste and not a great deal of definition. Grainy sweetness for me and the lack of a noble hop note. I generally like to define the Pils experience by the depth of the Saaz-like (noble) bite in the back end, and this doesn’t really deliver. Simple cracker and plain, neutral grains are everywhere.

I wouldn’t describe this as crisp as such, more neutral. The beer drops off for me, and I think the age may have something to do with that (bottled, May 25, 2011, best before May 25th 2012 )- seems like quite a long shelf life for a relatively delicate beer to me. Anyway.

My guess is that out of the tanks, at the brewery, less than 7 months old, and devoid of a trip across the Atlantic, this would be probably be a much better experience, but in this context it really isn’t very good at all. I’m surprised at the shelf life attributed to the beer from the brewery.