Reviewed from the 12 oz can that came from Vulcan Beverage in Birmingham, AL, but with additional comments and notes from the draught version that was consumed a few days ago at the brewery on the same trip.

Pitted, three finger head with some very good retention and lace. Nice orange color, quite bubbly from the can, seemingly less carbonated from the tap. 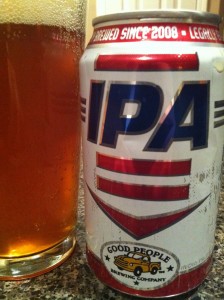 Lots of earthy hops present. Quite bitter in the back end and metallic. Carbonation is much less smooth in the can than on draft. The beer is generally a little more edgy from the can and I enjoyed it a little less than my draught experience at the brewery last week. Of course, the beer at the brewery is likely to be a lot fresher too, so that is an obviously unfair advantage for it (if we were comparing the two presentations). Dry in the middle and finish, a beer that is quite robust and does not leave a subtle feeling behind. This is entirely acceptable of course since this is an American IPA not an English one, so the lack of obvious malts is stylistically appropriate.

Some sharp bitterness from the can which I didn’t get on-tap. Could be my imagination of course, but whatever the actual differences are, I really felt as though the beers did show some significant differences. A little more soap came through in the draught version which seemed smoother in the mouth and on the palate than from the can.

All in all a solid, stylistically sound American IPA. The folks at the brewery were friendly and fresh from the tanks this beer did better than from the can.

Other: Apparently 7.20% ABV but this is incredibly well hidden and I would not have put it at that number.