Having had this last year at Thanksgiving and been lukewarm on it, I thought I would try it again this year. People seemed to be saying that the ‘2011 vintage was better’, but I don’t think there has been a recipe change so that confused me. Perhaps the breweries have got a better handle on making this beer a year, or maybe a simple batch variation, or perhaps nothing at all has changed. Looking at my notes from last year, I don’t see a huge difference, in fact I scored it identically.

$19.99 for the 750 mL from Total Wine in Kennesaw, GA, USA. Elaborate bottle, but the same presentation as 2010 except this year it has the vintage on the foil (I don’t remember that from last year). Into a champagne flute it goes. 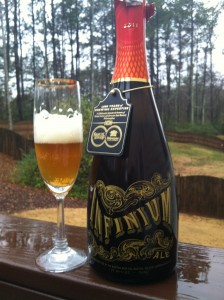 Sweet, quite bready and malty nose with a decent dose of alcohol.

There are some applely, cider like notes and several things I really can’t put my finger on. There’s quite an odd combination of dry and sweet alcohol and a fullish, caramel taste. Some toffee notes and a fusel alcohol feel. It’s certainly a complex beer, but to be honest it just doesn’t meld all that well for me. There are competing aspects of sweetness, dry notes, alcohol and bubbly carbonation, that when taken together make for a slightly confused beer. It’s a little odd as it is somewhat cloying without being incredibly sweet – bizarre. The mouthfeel is a bit thick for me, especially when considering the style which to me demands an easier, slightly more approachable feel – this beer is not that, since it really feels like quite hard work.

I dunno, poor value for money and beer that is a good idea poorly executed for me. The pour and nose are good, but taken together the good stuff doesn’t come together well at all.  I will almost certainly give the 2012 version a miss.

Elaborate bottle that I acquired for the somewhat bargain basement price of $16.99. Delighted to get it for that kind of money since there seems to have been a very mixed reception for this beer.

Poured into the champagne flute, the appearance lives up the style with a hazed, darker than one might expect, peachy, golden body and a hugely effervescent head.

The nose offers a dry, acidic alcohol aroma that is promising.

A beer in this style would need to be WAY drier, crisper, lighter and less sweet if I were to go near it again. I didn’t dislike it as such, but this beer is far too laborious for the style and couple with the alcohol is quite a big effort.

Not an easy beer, and I’ve had many better in the style and it seems as though these two brewers ought to have come up with a better beer. At $16.99 I wasn’t happy with the price, at a higher price point I would have been increasingly annoyed.