So, thanks to some more shenanigans related to distribution, Total Wine in GA gets in a bunch of Clown Shoes beer and some other Mercury Brewing Co. products too. Obviously Total Wine wouldn’t do anything illegal, but there’s also some wheeling and dealing going on here which has the effect of pissing off some of the local independents. Anyway, here it is and I’m grateful to have the chance to try some more from Gregg.

Pour is a hazy, orange affair with plenty of murkiness. Head is decent, with some retention and sticky lace. Looks OK, and largely what one would expect from an American DIPA. 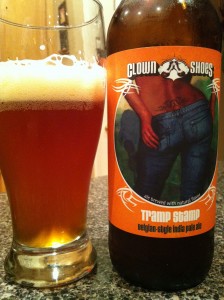 Nose is very orange, fragrant forward, with a striking combination of fruit and hops. It’s strong, and borders a little on the ‘cleaning product’ side of things (I think Billy Mays would be happy), but strangely it is not unpleasant to me. Unfortunately the nose turns out to be better than the tastes by some distance, and the beer goes downhill after it gets into the mouth.

Belgian IPA? Well, I’m not so sure. Essentially this beer drinks like an aggressively hopped, American DIPA with a multitude of tangerine, orange and other citrus peel making up the majority of the tastes. It has a somewhat aspirin-like finish, and the only hint of any sweetness or Belgian yeast character is in the aftertaste and even then it’s very slight. The aspirin isn’t really very nice either, as it feels thin and grating.

I suppose that in terms of the orange character one could call it fruity, but ‘fruity’ suggests ‘fruit flavors’ as opposed to chewing on the peel of an orange – there’s a big difference between those two things.

It’s funny, because whenever i think of a Belgian IPA I go back to the very first one that I think reasonably existed, and that’s Houblon Chouffe. IT is a million miles away from this beer. The original emphasis seemed to be on the Belgian part of the name which made sense. If one were to put to great an emphasis on the IPA part of the name one would have a dominant flavor overwhelming a more subtle one. Unfortunately that’s what’s happened here. In the final analysis the beer drinks like a thin, extra bitter, American DIPA and frankly that’s not good. The Belgian character is largely swallowed up by the hop bill, and the whole thing doesn’t quite come together. It’s a little boozy fro 7.0%, too. The beer gets caught between two stools. It’s certainly not a good Belgian IPA because it doesn’t have enough yeasty character or classic candi sweetness, and unfortunately it isn’t a really smoothed out West Coast style IPA either (which seems to be what Clown Shoes is going for here). All in all disappointing and not something I’ll be visiting again,

Nice marketing (there’s no doubt the name is catchy and I like the color of the label), and Clown Shoes have managed to do a nice job of positioning their beers, but unfortunately, like Hoppy Feet (one of the other two Clown Shoes beers I have tasted), the contents of the bottle don’t match level of the presentation.

Other: One of these strange arrangements where Total Wine has somehow managed to get exclusive distribution in GA. 7.0% ABV.