Damnit. One of the most disappointing beers I’ve tasted in a LONG time. The big problem here is the level of expectation that I had, since the advertised combination of orange peel and spices sounded exactly like something I would be really in to. Having read the label and considering my own tastes I had really high hopes – they were dashed.

The pour is a clear, golden amber. The white head is disappointingly small and recedes very quickly to give hardly any lace and only a very thin collar. The lackluster look would be something that I could live with, IF the nose and tastes came through strong – they don’t. 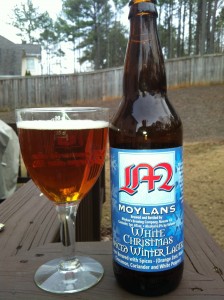 The nose gives a light citrus note, but that’s just about the beginning and the end of the orange element. I was hoping for a big blast of exciting spice – I didn’t get it.

I really enjoy the winter spices, white pepper and orange zest that the label promises, unfortunately the beer just doesn’t deliver them. Such a shame, and such a disappointment. The tastes are largely dominated by that really ordinary lager yeast taste which seems to envelop everything before it. There’s a nasty buttery diacetyl nature about it too which gets worse with warmth. There ought to be a sharp, crisp edge here with citrus bite and powerful spicy notes but all I get is a sickly, blah mess.

Quite thin to boot, this is just not very tasty and it lacks any kind of presence or depth of flavor. In a blind test, this could be any number of mass produced, insipid, bland lagers.

Light soap in the finish redeems this a little, but as for spicy, peppery, orange notes look elsewhere.

Moylan’s is a brewery I have a lot of respect for, but this is a major disappointment. Perhaps I was anticipating too much, but this fell really very flat, and the multitude of expected tastes were simply not delivered.