Never thought I would see this on shelves in GA. Love the presentation in the corked and caged, unique bottle.

Pour is pretty impressive. After the huge pop when the cork leaves the bottle, the beer pours with a massive, and impressive fluffy head into  the Duvel tulip. Lace is great, and the retention is excellent. A nice rich golden body too. 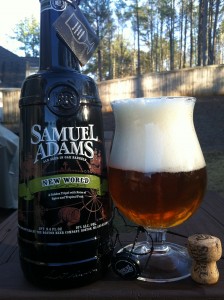 The etched Duvel tulip provides the perfect stream of carbonation to showcase the beer. It looks really, really good.

Some quite significant, sour-apple, funky notes in the nose. I was NOT expecting that!

I approached this beer with some trepidation. I love tripel’s but I’m not a big fan of barrel-aged beers. I was half-expecting a good tripel ruined, so was a little leery.

OK, on to the tastes. It’s a lot drier than a typical tripel. It doesn’t offer enormous sweetness but it does offer a very surprising, funky apple note. It reminds me a lot of a west country (England), cider. There aren’t really any barrel elements here, only the funky ones that have been surprisingly introduced. No liquor element, apart from the dry character in the back end.

There’s also a absence of other tripel character such as soft, tropical fruit and distinct white pepper. I suppose I catch a little pepper, but as for spice and significant typical tripel notes, there’s just not a great deal of them. I wouldn’t describe this as being ‘oaky’ either, which frankly I’m delighted about – I didn’t fancy a good tripel being ruined by a lot of wood.

I’m amazed at the degree of funky apple character here, not something that I was anticipating, and to be honest I prefer it over what I thought a ‘barrel-aged tripel would actually be – delighted that it turned out a bit different to what I was anticipating! There are a lot of vinous , grape like notes here. Lots of white wine character.