Every time that I pick up a VE bottle I am annoyed by the fact that the series is not a ‘vertical’ at ALL, but I suppose that’s a conversation/post for another day.

Decent legs, nice, solid copper colored with a tiny bit of lace and a thin, creamy and spotty film eventually settles on the surface. 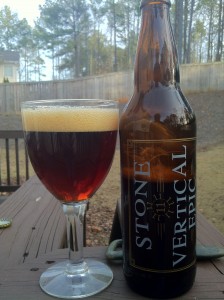 Nose gives no sign of heat, and is really very fruity. Some Belgian esters that do not really carry forward to the taste until the beer warms significantly, and even then they are not exactly ‘forward’ for me. A touch of alcohol in the nose.

It remains a bit of a mystery to me why Stone does not simply revert back to simple, Belgian Strong Ales of various descriptions to define the Vertical Epic series. I suppose their arguments would be copious and profound in reply, but to be honest there is no need for a brewery that does something so well to get away from their strengths. Sure there will be discussions about diversity, moving on, moving with the times, being a ground-breaking leader etc., but to me their ambition outstrips their need, and things can go awry quickly (see the travesty of ‘Emperial IPA’ – I’ll never forgive them for that, and Black Ales etc.).

Rich copper color a la a barleywine, but medium bodied and without viscosity. A little alcohol warmth but VERY subtle. By using the Anaheim chillies they are obviously pandering to a local element, and although they never crank up any kind of significant heat, they do have enough presence to pretty much quash any Belgian yeast character for me. Any advertised cinnamon is pretty much entirely absent as well, and the beer keeps on reminding me of a floral barleywine. Not something that I could ever imagined working too well, or even a concept that I could begin to conjure up, but this doesn’t turn out too bad.

Anyway, this never really feels like a chilli beer to me, at least not in terms of heat. At 9.4% ABV, the alcohol is (largely) nowhere to be seen.

At the beginning it feels like an American/English Barleywine hybrid, then as it warms it becomes much more floral. There’s a little warmth, sure, but no ‘heat’ as such. Much easier to drink that I was anticipating, a lighter and less aggressive than one might initially think.

After some significant warming, the aftertaste finally delivers a few pear notes for me, but it was a real struggle to get to the Belgian element here. The aftertaste FINALLY delivers some light heat, but I would not say that this is a feature of the beer.

In the end it’s OK, but I’m not buying any more than one bottle, and I’m disappointed when the VE series does not simply showcase something much simpler. Stone has gone from being a brewery that I loved, to one that I can take or leave, or at least one where I will now not be happy to assume that each beer will be a winner.

online games 2012 cddownloadfull.org here i found it Check This Out