Solid black pour with a small, creamy, taupe colored head that produces a persistent, one-eighth of an inch, creamy layer that sits for ages. The lace is nice, and coating, which reflects the feel that one gets in the mouth. 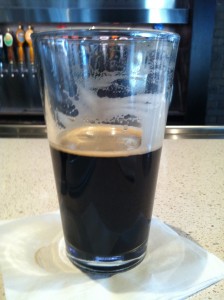 There’s a fairly distinct, roasty bitterness about the beer that packs a decent punch and has presence. To me, the finish and aftertaste of this beer is more aggressive than the initial, slightly sweeter upfront nose and tastes might suggest. It’s a little more bitter, aggressive and assertive that I thought it was going to be, even after the first tastes.

Despite the bitterness there is a creamy subtlety about this beer, and in that respect it reminds me of both Breakout Stout and the fantastic Midnight Special. It’s not as gentle as those beers, at least not to my recollection, and of course it isn’t trying to mimic them, but it does bring a decent level of sensibility within the confines of the style, and in terms of what I suspect it is trying to achieve.

The light charcoal roast persists, but again it does not grate – which strikes me as the hallmark of a beer that is been brewed with skill and thought. The slight temperature increase helps here, as does the adjustment of the palate as the 16 oz is consumed.

Personally I’d like a little more sweetness but of course that’s not what this is ever going to be about, so perhaps an unfair criticism/comment.