Single hop beers (or even multi-hop beers that are dominated by only one hop) are OK, IF the hop that is being featured is one that is suitable, and can cope with being on its own or heavily featured. Some hops can manage, some can’t, so I always feel such beers are a gamble. I’m not sure if this is a single hop beer of not but, the web page for the beer would suggest that it is.

The pour is nice, giving a lovely copper body with a fluffy white head. Some good retention and some nice, sticky lace. Good looking beer. 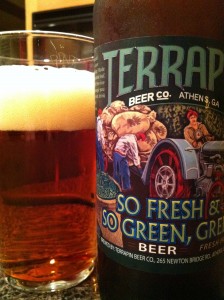 This is a very light, very drinkable beer. It’s definitely ‘English’ in the manner in which it drinks, and it’s in no way aggressive. Easy drinking is a feature here and in that way it’s surprising for a beer that is supposed to showcase fresh hops. There’s a lot of rounded malts with some simple, gentle sweetness, and a lot of simplicity about the hop profile.

I have a suspicion that this beer is going to get a lot of bad press, and perhaps for good reason. Essentially this is supposed to be a beer that showcases a big hop presence in a wet-hopped manner which in turn brings out the ‘greenness’ in the name, and makes it come alive – on those fronts, quite frankly, it fails horribly! Also quite frankly, I’m delighted that it does fail since it produces a really mild, malt based, biscuit featured simple English style Pale Ale! It’s really delicious, but in no way is it likely to satisfy the hordes that are looking for a green, fresh hopped brew.

In one way, in order to be entirely consistent, I ought to be critical of the beer too, since (style) labels matching bottle contents has been something of a pet peeve of mine for a while. I advocate for beers ‘to do what they say on the tin’ all the time, and in that respect this beer fails miserably! To be honest I like the beer that comes out of the bottle better than the beer that SHOULD come out of the bottle (based upon the label)!