Pour is a black-cherry colored affair with a bright pink head. Obviously not much retention or lace on the froth. 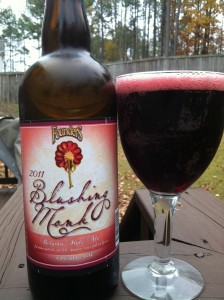 Nose is pretty rich on the raspberry note (hardly shocked) but it is comforting that it’s rich.

The tastes are totally dominated by a sweet raspberry element and very little else. I don’t know what the base of this beer is, but the fact the label refers to it being a Belgian Style Ale is largely irrelevant in terms of the taste. There’s a light tartness to it in the finish, but it’s largely just a sweet assault of raspberries.

A pleasing, light carbonation adds to the sensation and helps the beer stimulate the tongue. Nice, lively mouthfeel.

There’s really very little to say about the tastes here outside of ‘sweet, slightly tart, rich raspberry’ so if those are things that you are not interested I suggest giving this a very wide berth. I suppose it is a little disappointing that there isn’t some more obvious Belgian notes, but there is no way that I can detect any of the yeast character or candi notes. There is a very slight bitterness in the aftertaste that is not tart and sort of reminds me of a hoppy note, but it’s incredibly short lived and I’d be surprised if many people would agree with that analysis.

As a result of all of the fruit, there is simply NO point in classifying this in any other way than simply a Fruit Beer. beeradvocate.com has this listed as a Belgian Strong Pale. Their designations generally try to reflect the brewery classification of the beer (which in this case presumably comes from the base beer that the raspberries are added to, so I ‘get it’), but even if that is the case it is an absolutely meaningless designation once one experiences the beer.

It IS sweet upfront, but at the same time it seems relatively light and drinkable. The beer does not seems cloying or heavy which is a minor triumph it itself. Alcohol is incredibly well hidden, but it is just another casualty of the intense raspberry element which, as I say, dominates absolutely everything.

Definitely challenges New Glarus Raspberry Tart in terms of depth of flavor and fruit intensity. Tasty, but you better be ready for raspberry syrup!