Pour delivers a golden macro colored body and a slightly above average (although not spectacular) head, retention and lace. Small ring of foam left after initial pour. 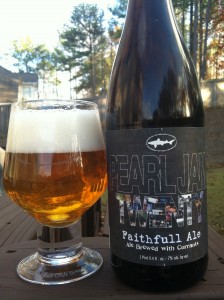 The nose and tastes have weak, yeasty, lager notes about them with perhaps a very mild hint of white pepper, alcohol and fruit. The tastes exaggerate the fruit part of the beer a little, but in no way is this beer ‘fruity’ as such.

I must admit I am a touch confused by this beer. On the front label it describes itself as being ‘brewed with currants’. Now, as far as I am concerned ‘currants’ are dried, seedless grapes. That sort of coincides with the grape-like element of the beer. OK, so far, so good. However, on the side of the label it describes the boil as having ‘black currants’ added. This is where things get confusing. IF DFH is talking about ‘currants’ then there is really no need for the qualifier, ‘black’. I seriously doubt they are talking about the Ribes berry, the ‘blackcurrant’. If they were, then I would expect a dark purple color and a serious fruit beer. This is NOT that so I suppose that DFH is simply referencing ‘currants’ which do not need the ‘black’ qualifier. ‘Currants’ and ‘blackcurrants’ are two very different things, and although ‘currants’ are indeed ‘black’, using that adjective confuses the issue. Anyway…….

I find the beer too light, even teetering on the verge of watery; a beer which lacks much presence until the aftertaste, but even that fades quite badly. A very light spice note in the finish, but the ester character seems watered down and too light to me. The alcohol doesn’t really manifest itself in the manner I feel it should either. This beer does not well in its selected genre for me.

Faithfull Ale feels much more like a Belgian single than a heavier hitting BSPA, which would be OK if it were supposed to BE that! It isn’t, so I feel underwhelmed. Of course, the fanfare that accompanied this beer doesn’t help, as expectations are elevated which rarely helps.

I bet that lots of these bottles will sit in Pearl Jam fans’ memorbilia collections, unopened. It would be too strong a criticism to suggest that might be the best place for ‘Faithfull Ale’, but nevertheless, all in all this is quite a large letdown for me.