Not too often one sees a wheatwine so it’s always a beer that I’m interested in. Some fairly conflicting information regarding the ABV here. I’ve read (and heard) everything between the low 7’s and 10 (Untappd has 7.6%, beeradvocate 10% and Brooklyn’s own blog 9%), so I’m really not sure what the truth is. Part of the draft only, Brewmaster’s Reserve series, this came from Hop City in Atlanta, GA and I took a 32 oz growler of it. 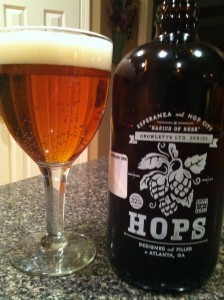 Pour is not much more than a golden, macro lager affair and after a decent head initially, it drops off to give no head and very little lace.

Nose has a big, fruity, juicy-fruit chewing gum note and this carries into the taste too. However, the tastes feel really light and weak in comparison to the nose. Lacks much depth at all, and really fails to deliver on a promising aroma.

There’s quite a lot of pear esters across the front of the beer, but to be honest this drops off very quickly to give a watery effect. The problem here appears to be the lack of body and the overly-light touch. It’s once thing for a beer to be light and drinkable, but for such a (generally) heavy hitting style I’m looking for so much more depth and flavor. There are some yeast notes that make the beer feel more like a Belgian, and in a blind taste test I would probably categorize this as a Tripel. A slight taste of white pepper – I suppose?!

The finish is equally thin and the beer leaves me with a solvent aftertaste that is not good. Frankly this is a pretty disappointing beer, especially by Brooklyn standards and it really lacks presence. DELIGHTED I didn’t buy twice as much in a traditional growler because I would have REALLY regretted that! Brooklyn generally delivers a much higher standard than this. It ended up not really a wheatwine, not really a BSPA and not really a Tripel so it missed on a number of counts for me. The alcohol seemed to build and ultimately gave me a bit of a headache.