22 oz bottle, the latest in the Dank Tank series, this time with a red, yellow and green motif. It’s difficult to keep up with the amount of beer being produced of late, especially in the what has now become, quite prolific Dank Tank Series.

The pour gives a nice ‘gloop, gloop’ sound as it forms a chestnut brown color (rather than especially ‘red’) with some lovely head, and some great, sticky lace which for me, is an absolute necessity for a beer of this style. 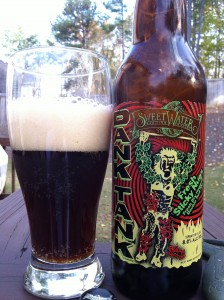 The nose on this beer is amongst those that are exceptional. I’m not sure that I really LIKE it a great deal, but there is no doubt that the aroma that it gives off is beyond most other experiences. It really gives the impression that pure, fresh, green wet hops have been squeezed to extract their oils, and then the oils have been concentrated even further. ‘Green’ and ‘Hop Juice’ are the adjectives for me, here.

Luckily, the nose doesn’t wholly transfer to the taste. IF it did, I think the beer would be almost impossible to drink. There is a massive malt presence to back up the hop profile – thank God! Very light burn on the way down (which I wholly approve of) and a fairly large degree of sweetness which is somewhat necessary given the hop-oil component. The hops are almost medicinal and they are unrelenting. BIG, hoppy burps are induced, again a sign of a quintessential beer of this type.

I’m astonished at how drinkable this is. Very smooth and surprisingly evened out given the fresh, green aggression.

If truth be known this is not really a style or a beer that I am really in love with, but the high score is being generated out of a deference to it being a really good example of that style. If you are looking for something fresh, green and full of oily pine juice, then this is a good beer. If you want something that is incredibly bitter as well, this won’t fit the bill so well. Either way I would definitely characterize this as a super beer.