Dark chestnut pour, quite close to black. BIG, ice-cream like, creamy head that has some super retention and some exquisite lace. The appearance may be the best part of this beer, and by quite some distance. 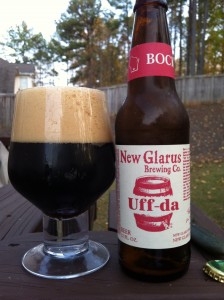 Nose is unsurprisingly neutral if I’m honest. There’s some very light malt but there appears to be a serious lack of volatile components.

I dunno, this is a pretty weak ‘bock’ in the grand scheme of things, and seems to drink more like a relatively neutral Schwarzbier. There’s nothing inherently ‘wrong’ with the beer in as much as it is un-flawed, but if I were looking for real bock character I think I’d be seeking something else. There’s a little sweetness and some chocolate elements, but frankly I’m looking for something a little more aggressive in the alcohol department and something that gives more impact in terms of the malt base. Is it malty? Certainly, but it lacks punch in terms of depth and alcohol.

As it warms much more bock character comes on through which redeems it somewhat, but by then I’ve formed an opinion and the beer is half gone. The temperature that I opened it at was suitable too, so I don’t feel as the beer is redeemed entirely. Disappointing from a well respected brewery, and a brewery that usually does this genre of beer much better.

Disappointing in the grand scheme of things without ever being a ‘bad’ beer.