Jailhouse’s collaboration with O’Dempsey’s and that makes me a little nervous because it brings together a brewer that I have been incredibly impressed with (Jailhouse), along with one that has done largely the opposite for me.

Reddish, mahogany color on the pour, but not really any great depth or clarity that I would normally be looking for in a beer of this style. Don’t get me wrong, it looks fine, but not the best I’ve ever seen. Head is initially good but fades to an average size and the lace is a little below par. Not quite as pretty as I was hoping (or as it initially looked), but still acceptable. 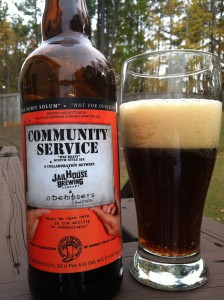 Nose and tastes have the light smoke, and deep malts that one would hope for and expect on a beer of this style and type, but at the same time the alcohol comes through a little more than I would want. The effect of that solvent taste is that it seems to slightly dilute the beers’ richness. It is of course appropriate for there to be a decent alcoholic punch, but there seems to be a bigger degree of EtOH character than I was anticipating. The alcohol adds to the shorter than expected finish as well. With beers of this type one expects rich, lingering finishes and more depth and it doesn’t quite deliver.

This beer is VERY sweet too. Again that’s expected and entirely appropriate but it seems in invade and  bang up against the more subtle parts of the beer that OUGHT to be distinguishable.

Mmmm, not bad, but not the best beer by Glenn by a long chalk, however he HAS set the bar very high. I think I’d buy it again, but the alcohol needs to settle down a bit, and as such I wonder if this is a beer that would age well? Only one way to find out I guess!