The highly recognizable, ‘Anchor shaped’, 22 oz bottle that reminds me of their ‘Small Beer’ every time that I see it. Neck label along with the classic oval. 1GV on the rear gives the usual Anchor code in raised, dot matrix.

Noisy, gulp, gulp pour leads to a murky brown body and some lovely, pitted, off-white head. Lace is average, but it does give some super creamy, thin film. Ice-cream like on the surface of the beer. 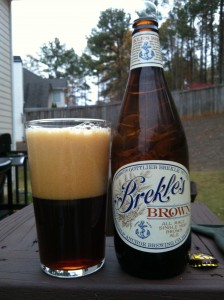 The interesting thing about this beer is that if I were to consider just the nose, I would be expecting something that gave a typical American brown ale profile with lots of aggression and hop bitterness. The taste actually seems to pull back on the hop element quite a bit, and offers a degree of sanity that makes the beer drink more like an English/American hybrid brown ale. There’s a touch of acidity in there which adds to the character. Medium body makes it highly drinkable, and at times it even feels ‘light’.

There’s plenty of flavor here and it feels remarkably well balanced. There’s a cleanliness about the beer which no doubt comes from the simplicity of the recipe, but also even a little grapefruit edge from the Citra hops. In itself not that surprising, but at the same time in a beer of this type I am a little surprised that I can pick it up so easily.

If you fancy an easily accessible, relatively light drinking brown ale, that is NOT typically English in terms of its sweetness and malt profile but also NOT typically American in terms of being aggressively over-hopped, then this is probably the perfect candidate. If on the other hand you are looking for greater characteristics of those two extremes or a heavier, more alcoholic, nutty brown then I think you’ll be disappointed – I wasn’t. Tasty.