Chestnut body with a good, light coffee colored head on an aggressive pour. This fades fairly quickly to give a thin film on the surface but not much lace.

Nose offers a BIG, chocolatey, dry. cocoa waft, but not what I would call any significant element of vanilla; it’s just not there – shame.

I have to be honest and say that Turbodog is quite a long way from one of my favorite beers of all time, so I have relatively low expectations for this beer. However, this is a brew that works well within the parameters that are presented. It’s relatively rich for a beer of 7%, and at the same time relatively light and drinkable. Paradox? Perhaps, but it melds nicely and without fuss. A pretty nice compromise is struck here. As the beer warms there is a little more vanilla, but whichever way you look at this beer it is NOT ‘vanilla heavy’. 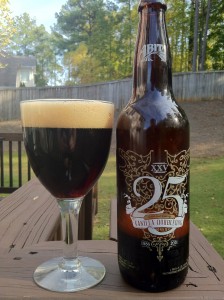 More dry, bakers chocolate in the back-end and perhaps a touch of vanilla, but once again it’s all very slight for me.

The mouthfeel is also very light; obviously this adds to drinkability, but this is not a beer with a huge presence. In that respect I quite like it. Alcohol is slight too (at least in terms of taste), and the beer is an extraordinarily drinkable one in many respects. I am delighted that the calling card (for me) of Willamette hops, EARTHINESS, does NOT make any significant appearance here. Not hoppy at all, so in that respect true to the English Brown Ale roots of the original Turbodog.