Shmaltz is a brewer I have come to enjoy very much, if for no other reason than the fact that they generally favor the maltier side of the spectrum which usually suits me more than the other end of things.

Very dark chestnut (close to black) pour which provides more head and lace than I was anticipating given the ABV. A very thin film forms on the head of the beer but with little or no lace. Held to the light the beer has many more garnet red elements of color than one first sees. Pretty much as expected for a beer of this nature. 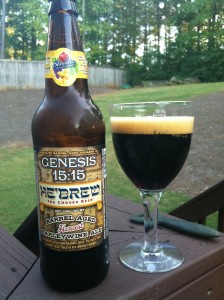 Nose offers a huge, malty bread fest and a touch of sherry like liquor, but it’s not as strong as one might expect.

As expected the flavors are all very bold and very round. It’s also a colossally sweet beer as well. Lots of demerara sugar all over the palate and some gentle barrel-aged notes too. The wood and whiskey elements are not strong at all, nor is the fruit profile, rather the beer simply cuts a large swathe through the twin masters of sugar and malt. If I had to pick one of the fruits listed I would run with dates (or maybe figs), since they tend to invoke some of the heavier, sweeter elements, and certainly sit in contrast to an acidic or drier notes that one might encounter from grapes of pomegranate. The alcohol is warming and it builds, but it doesn’t feel close to the threatening 13.4% that adorns the label. Listed on beeradvocate.com as an American Barleywine, this beer is predictably not hoppy enough to sit in that category and is much closer to an English version of the style.

Drinking like a lightly coffee infused, thick, beer milkshake, there is no let up from the sweetness, but considering that, and the general profile of this beer, it drinks a lot more easily than one would imagine. The lack of bitterness definitely puts English Barleywine in mind, and there are even smatterings of old ale and a little hazelnut note from the brown ale style, too.

The beer rounds out at the back end with some more serious alcohol, a touch of wood and some gentle cognac like elements. Even a touch of chocolate.

Like most Shmaltz beers this is a brew that has a massive malt presence, is sweet but also tiptoes within the parameters of drinkability. I’d split the 22 oz if possible, but at the same time, over the course of a whole evening this is a sipper that I didn’t get tired of.