Not any easy bottle to get into with medium thick, black foil and a cap that is quite tricky to prise off. $7.99 from Green’s on Buford, Atlanta, GA, USA. It’s an elaborate bottle in dark green, thick glass with the dimpled bottom, and no doubt that adds immensely to the overall cost of things. I do like the presentation, but of course the increased cost is (literally) the price one has to pay.

Huge head on the pour that leaves that crazy looking ice cream type head and great lace. A dirty lemon (pineapple juice) colored body. Carbonation is fairly low which is perhaps a strange contradiction based upon the size of the head. 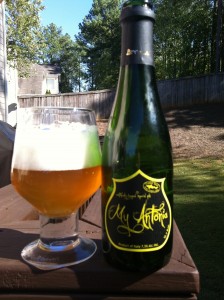 Good sinus pine upfront but tempered with a lot of sugar.

Initially viciously bitter grapefruit but this fades with warmth and the beer levels out beautifully to give a sweeter edge. Much more American DIPA than Imperial Pils for me, the beers’ dry-hopping rules the roost here and takes into into bitter, hoppy territory without the drier, simpler Saaz bite than one might expect. Don’t get me wrong, this doesn’t get into west coast, resinous pine country but it certainly feels like an east coast DIPA more than an Imperial Pils to me. Sweetness in the aftertaste and back end which is really the antithesis of a Pils based beer.

Smooth with stinging bitterness in the mouth is the feature here. It’s pretty drinkable (with a touch of aspirin), but from the cost point of view and the style angle it’s not a beer that I’m going to be too deeply into in the future.